Time to get more serious now..

OK now that the Sani2C entry has been acquired, its time to start putting the kilometers in and making the most of spring riding. This has to be the best time of the year to ride, the heat is not here yet, the routes have dried up and the long grass has been burnt short leaving magical single track exposed to being brutalised by enthusiastic mountain bikers.
We had a good week of riding: 4 early 5 o' clock starts before work, doing about 30km each time (interval training on 2 of them) and then a nice longer ride on Sunday. The Sunday ride, we did 67km at an average of 20.5km/h, 360m ascent. Awesome riding, the route we did was slightly different and it was so nice to ride through parts that are normally waterlogged and muddy.
In the afternoon I got the family on their bikes (after doing some TLC on all 6 bikes). Pictured below is my youngest and myself taking the Giant 1/2 wheeler for a long overdue ride. I attached it on to my wife's bike, as my 29er is too big and the rear shock bounces the back bike a bit making him a bit nervous. 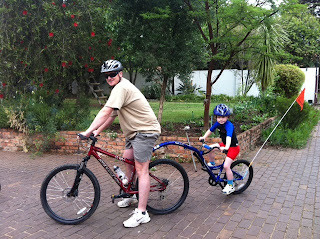 At last summer is here and the horrid cold, dark winter rides are a thing of the past. Greg and me headed out to Groenkloof nature reserve in Pretoria. This a wonderful place full of trails, single track and heart pumping hills. We arrived just after 07:00 and had an incredible ride for 2 hours doing just over 30km with 500m ascent. Plenty of single track with a few rock obstacles thrown in to keep you honest. Greg had a nice fall (which is unusual) and I had a whopper, that left some of my DNA on the reserve once again. We did onion hill twice and it did not bring tears to our eyes this time - nice change from the Benoni flat lands.
We were also fortunate to see some game - herd of zebra, family of giraffe and plenty of impala buck. Below are a few photo's and a short video of some of the ride.
﻿ ﻿﻿ ﻿﻿﻿﻿﻿﻿﻿﻿ ﻿﻿﻿﻿﻿
Posted by Richard at 5:37 PM No comments:

Yeeeeeeeeeeeeeeeeeeeha, Greg and me have finally got into the Sani2C mountain bike race. This is the acclaimed nirvana of mountain biking races in South Africa and is 300kms over 3 days next May. The race starts in Underberg in Kwazulu Natal and ends in Scotborough on the coast. Like every frustrated mountain biker in South Africa we have tried for years to get into this exclusive event – fortunately they included another day/event the Sani2C Trail and through loads of persistence we managed to get an entry. Now the serious training has to start, at least we have some time before the event....
Posted by Richard at 11:48 AM 2 comments:

Weekend in the bush

Last weekend we were fortunate enough to spend the weekend on  a friends private game farm just outside Belfast (Eastern highlands of South Africa). Below is a picture of the farm house which powered by solar power and water is from a nearby spring. 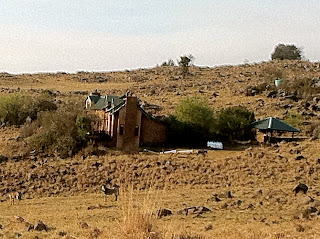 Fantastic to spend time close to nature with no cars, people etc. We took all the bikes with and had a few family rides which was great except the kids did not fancy the hills too much. On the Sunday I went on a nice longish ride through the game farm and down some district rides - exploring the area around the farm. Some nice hills that had me using granny gear a few times (over 600m ascent in just over 25km). Below are a few photos taken during my ride and when riding around in the animal trails when the kids were cooling off in the dam the previous day. 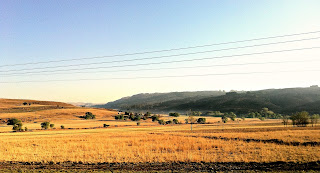 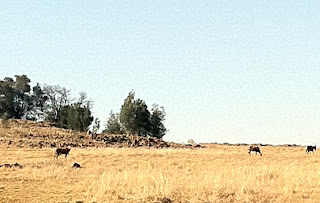 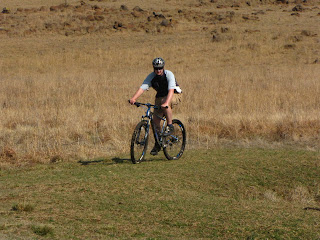 It is not often that everything just seems to go right in a race and you feel invincible. Well this was the race that will go down in history, where Richard Dawkins rode faster than his mates and stayed on his bike the whole race.

The race started at Cornwall College in Irene just outside Pretoria and then headed under the R21highway towards the Eastrand (some parts Greg and me had the privilege of exploring the Sunday before). There were one or two hills that got the heart beat up in the first half of the 70km route, but fortunately our few excursions to Suikerbosrand had helped me not to be scared of hills (I passed a twitter legend @MTBBarbie_44 on one of these hills and introduced myself while riding past).
At the 40km water point, to my surprise I caught up with Greg (he had started 5 minutes ahead of me in group D seeding with Clint). I was good to ride with him most of the way back to the finish, all the races we have entered before, I haven't even come close to him. I was averaging over 20km/h, which for a race I had not done before (in about 700m of climbing). I felt good and could have carried on, but unfortunately at 60km, we met up with the 20 and 40km riders and this was very hazardous trying to pass them on the single track next to the highway etc. The final single track near the river at the end was also a big disappointment (not because I had to walk over the bridges) everyone was off their bikes and there was a big bottleneck at the river crossings. We wasted at least 15minutes here. Last little hill back to the College was no problem - it was so cool to pass some of the slower riders (didn't think I would ever say that, as I am usually the one being passed). I also managed to finish ahead of racing snake legend - Clint which was also a big surprise (he had mechanicals but I will take the win anyway).
After the race it was awesome to meet some of my twitter mates @hopeleighm @gmyburgh and had a beer with @clintcosgrave, @jacquescoe etc. Really chuffed with my time - moving average time (less the stops for the bottlenecks) was 3:27 - an hour faster than my last Nissan race at Hazeldean. 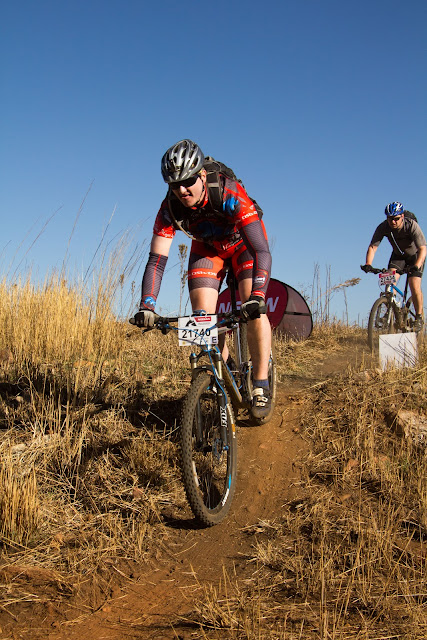