Crashes - the story of my life

Ok so Terra-firma has a thing for me - the attraction is not mutual, as it unfortunately leaves me somewhat scarred, battered and bruised.
Early Monday morning, still nursing my bruises and cuts from riding at Sun City, I took a nasty tumble on a piece of track that I have done hundreds of times. My wheels caught the ridge in the middle of the road as I was about to turn into the single track and my bike just slid out from under me. This left a nasty painful graze on my leg (as pictured below) that has been a sore point (excuse the pun) this week, totally disrupting my riding plans. 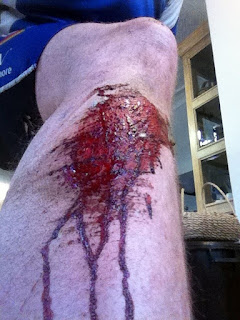 I had to give the Nissan Cullinan Diamond Rush race that I had entered a skip, as I knew with certainty that if I rode the 70km as planned, I would fall exactly on my nice big roastie. Instead I had a short ride with Greg on Saturday morning and dusted off my road bike for Sunday.
Riding on road I thought would be uneventful - how wrong I was. I met up with some old roadie acquittance's at 06:00 at the Keg in Benoni and we headed out on old Pretoria road towards Bapsfontein. The road bike felt good and I was surprisingly averaging 28km/h for the first 35km. Then it happened - there was quite a lip between the tar and the edge of the road and Earl's front wheel slid off and he ploughed into the tarmac. Victor who was behind him, hit him and went over his handle bars connecting his head on the road. I was behind Victor and just managed to avoid the mangle ending up on the other side of the road. Long story short - Victor - hospital - stitches - plenty sore and Earl - roasties - broken bike and pride.
Can't say I am too fond of riding on the road, the cars are hectic and riding behind someone can also have its pitfalls. I was nice to get out and get a decent ride in though - we did 75km (we aimed for 100 but the accident shortened our aspirations), at least I know my road bike is ready to tackle the 94.7 road race next month.
Posted by Richard at 7:26 PM No comments:

The past few days I was fortunate enough to go to Kwamaritane Game Lodge situated just outside of Sun City in the North West province of South Africa. Holiday - not really, it was a work team building event. Not wanting to miss out on the opportunity to ride in new places and keep up my training, I decided to take my bike with. Where to ride is the question that was soon answered on the hub website, with Neil kindly answering my plea. Neil is a local at Sun City and is familiar with all the fabulous routes around the resort.
We met pretty early after 05:00, to get an hour or two in before Neil had to go to work. I managed to convince one of the roadies at work (Chris) to venture onto the dirt side and brought a bike for him to ride. Here he is below savouring some of his first single track. 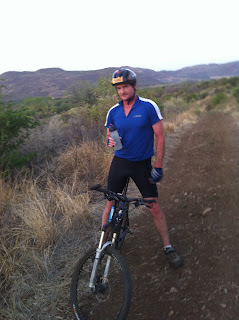 The riding was spectacular, we rode on Thursday and Friday morning. Mostly on the route that the Sun City MTB race used the previous month. We were so fortunate to have Niel as our guide to take us through the route and through the golf course etc. Loads of single track, jeep track, sand and rocky hills that added variety to what we don't get in the outback of Benoni. I had a nasty fall on the first day that will leave its mark for a few weeks and Niel also had a tumble - the roadie was the only one not getting closer to mother earth.
﻿

Not riding related but it was an awesome experience - we went down a 2km zip line/Foefie slide off the top of the mountain at Sun City. You get harnessed to the 'trolley' that runs on the cable that is connected to a tower 2kms down at the bottom of the mountain. I had my riding helmet on and managed to record the experience on my headcam.

Posted by Richard at 8:19 PM No comments:

It has been exactly 3 years since my life has changed and I started riding mountain bikes. Pre my flirt with the dirt, I was a couch potato of note. Not many sporting events would escape my concentrated glare from the couch. I knew my rugby backwards and was on top of the Global Standings (for 12 rounds of the Super14 rugby competition) for the Superbru prediction game - sadly finishing 3rd out of 30,000 players at the end (used my heart and not my head being a avid Shark supporter). Unfortunately this was not a healthy lifestyle and my mates nagged me to start riding, as they got fitter and I got fatter.


And so I did, slowly ambling out doing a few kilometers at a time and then the bug bit and now my love for mountain biking has intensified so much that my wife thinks it's obsessive - but I have lost 10kgs and have never felt so healthy and happy in my life. So where am I going with this blog post? Well, I had a decision to make this weekend, either watch the Springboks play Australia in the rugby world cup quarter final or, escape to Nirvana on my trusty 29er. This was an easy one for me to make and it made me realise how my life and priorities have changed over the years.


Today, was one of the best mountain bike rides that I have ever done. Greg and I hit the dirt when everyone else was off to their mate's homes to drink, eat and watch our boys in green try valiantly to win a rugby match (my PVR was set of course).It was an awesome day for riding, not too hot or windy. We ventured out past Serengeti golf estate towards Irene. We had to do a detour at one stage, as a grumpy farmer would not let us through his farm (the security guard was ready to call the police). But the rest of the ride was great - we found some new routes - at one stage it felt as if we were riding in the Drakensburg, nature at its very best.


The ride ended up being the longest MTB ride we have ever done, 82kms at an average of 21km/h and 80% of it was on jeep track, district road and single track. It was so good to be out there for 4 odd hours to round off a good week of riding after 4 x 30km morning rides, thus totalling 200km for the week - Sani2C we not ready yet but we are getting there.....
Posted by Richard at 7:57 PM No comments:

How fitting is it that this is my 100th blog post and it will be about the experience I shared with (amongst others) the guy who introduced me to mountain biking a few years ago - Melt Loubser and this was to be my first race with him.
Melt and me were fortunate enough to be invited to the Brait Grace2Grace mountain bike race, situated at the Mount Grace Hotel in Magaliesberg outside Johannesburg, by our long time legal guru PJ Hope. This is a team of 2 race over 48kms in the Magaliesberg mountain. PJ and me were one team and Melt and Nigel the other.
The race started out pretty early at 07:00 (I was up at 04:00 to get there on time) and the weather was really windy - but at least there was no rain. PJ bolted out the blocks and we spent the first few kms chasing him. Nigel felt the pace really early as this was his first mountain bike race - but he was lucky to have Melt as his partner as he is a veteran mountain biker (7 Sani2Cs and 3 ABSA Cape Epics etc etc) and he pulled/pushed him most of the 48km route. The route was fantastic, not too technical and had lots of hills to keep the heart pumping - notably the long climb out the valley. The 4 of us rode together and had good fun along the way - Naaige was a good sport and really gave his all.
We finished together as a team in a time of 03:22 (750m ascent). Afterwards there was a feast of note - so much complimentary food and drink, we replaced all the calories burnt in the morning ride.  Thanks to PJ from Reed Hope Phillips Attorneys for this wonderful experience it really was memorable.
Below is a short video from my headcam during the race - you will see proof of Melt pushing me off the track in response me chirping him...