After a few days after my horrific close encounter with the tar and my wounds not really healed yet, I needed to go out and get back on my trusty old mountain bike.

This Sunday I was fortunate to be joined by my friend and neighbour Andrew (years of nagging finally paid off). We hitched our bikes and traveled to Dunblane horse estate in Bredell where we parked headed out to the vast open spaces. It was really awesome to be out riding once again, the broken nose hurt a bit when going over rough terrain, but I was in my element so it didn't matter much.


Andrew was strong - those training rides around the suburb really paid off. There was loads of puddles and mud and pretty soon I very dirty (my wife's words of caution echoing in my ears about keeping the stitches clean etc). At one stage of our ride the road was flooded (as seen below) and we decided to walk around through the grass. I didn't see the big DANGER sign and ended up waist deep in a trench - soaked to the bone and Andrew had to pull me out. Here is Andrew below - see he hasn't even started sweating yet: 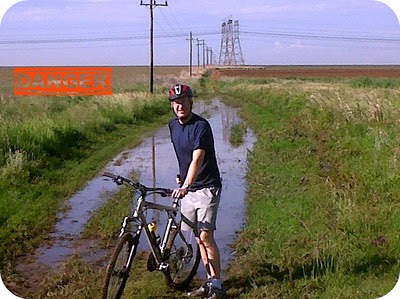 We ended up doing just under 30kms - which wasn't bad for Andrew's first ride. I was really pleasant to be out in the open again, soaking in the majestic scenery and wildlife that really makes mountain biking such an awesome sport. ﻿Hopefully the bug would have bitten Andrew and I will see him out there with us in the future.
Posted by Richard at 3:12 PM 1 comment:

Email ThisBlogThis!Share to TwitterShare to FacebookShare to Pinterest
Labels: MTB rides in the Eastrand

Little did I know that my first ride after the 94.7 would be so eventful, after riding with 25 thousand riders and flying down hills with speeds over 70km/h my first ride alone in an empty road would be chaos.
2 km away from home it started to rain and I thought it would be best to do up my new First Accent rain jacket - should I stop or not? This was going to be a bad decision, as I carried on and took my hands off the handle bars and started zipping up my jacket. I wasn't going fast enough and lost control of the bike and ended up face first in the tar. What a mess - nose bleeding profusely, chin cut, lip cut and nose grazed etc. Off home - quick clean and then drive to the Glenwood hospital emergency.
I was fortunate that Dr Raymond Hogg was still on duty after his night shift, I had met Raymond before after he has treated one of our children (on recommendation of our friend Heidi). He patiently sewed up my face 15 stitches above the lip and they cleaned up the rest of the cuts etc Nose was also broken but there was not much they could do here, I was then sent for Xrays to make sure my chin and neck was not fractured.
2010 has not been a good year for me with regards to accidents on my bike.... 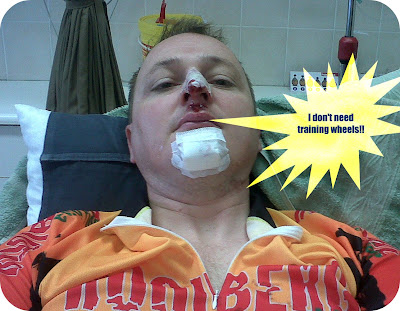 Posted by Richard at 2:22 PM No comments:

﻿On a day in Johannesburg when cyclists rule the streets, 24000 people race a lap around the city in the Momentum 94.7 Cycle Challenge. This Sunday I made it to the finish line - just! This is my tale of the race… 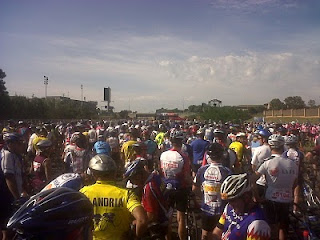 I was in starting group CC and after a good hour waiting in the hot sun we set off at about 08:20.
How awesome was it to ride on the highways and closed roads, this is what makes this race so great. A bit of a new longer route through the center of Joburg, great to fly down past Sunnyside Hotel this year instead of going  uphill (a mountain biker took a hefty tumble in front of me at 50km/hour - looked very sore), we went past Ponte (my training mate Peter went flying past me here) and on to the highway and back into the city through Ghandi square, M1 highway again, Mandela bridge etc. It was really unique experience riding here and I still felt strong at this stage. Then through the tree lined suburbs through to Randburg - hit my best ever top speed of 70km down Jan Smuts going past the Zoo.
Quick stop in Randburg to chat to my mates Brad and Zanne who were in their usual supporter spot just above Republic intersection. Breezed through without stopping once until the N14 highway, I was fortunate to ride with a good friend from the past - Robyn for a few kms up Malibongwe until she left me on the final hill. Great to see the supporters cheering on the side of the road - people were cooking breakfast on skottels, lying in blow up pools drinking beer, offering drinks and splashing water as you rode past...great spirit.
N14 highway and the rest of the race was pure hell, someone left the furnace door open  - the heat was energy sapping and the drags seemed to go on for ever and my feet really hurt. Eventually I had to stop under a bridge to cool off and re-energise. After initially vowing not to stop at any water points in the race - I ended up stopping at all of them from the N14 onwards, the heat was killing me. My average speed up to N14 was 24km/h and from N14 home, must have been about 10km/h - yuck. I had to stop to loosen my shoes as I couldn't feel my feet circulation was restricted.
Eventually limped home 40 minutes faster then last year and vowed never to do the race again (until Monday morning where I already planned how to beat my time).
Reasons why the race did not go as planned:
Next year I plan to slice another 40 minutes of my time and ride in pink with Brad Brown...now that's a goal to train to.  Thanks to the organizers for an awesome well planned race.
Posted by Richard at 6:07 PM No comments:

Awesome to be back on the MTB again, how I missed it (road riding really sucks - to clarify, because of the cars). This Sunday I met up with Greg, Jacques and Darren (great to have new guys ride with us - at least Greg had someone to keep up with him) 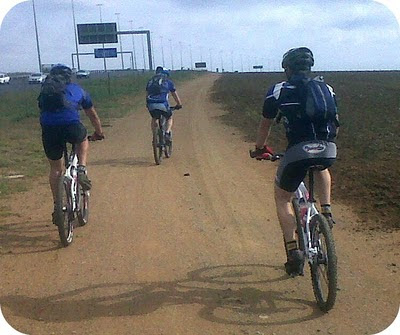 We started off from the gym at Lakefield and made our way out towards Serengetti and the great unspoilt plains of the East Rand. 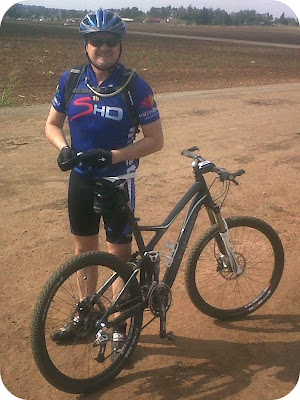 After almost loosing Darren and Jacques, Greg and me had to wait a few minutes until they found us - gave Greg a chance to do some bike repairs.
We went past Serengetti and then past the Barnhoppers Model Aircraft flying club and did a loop around the sewage pipe hill - I almost took a swim when crossing the river (the line I took was really deep).

After about 50kms we had a break under the trees - ok it was more like a picnic for Jacques and Darren - they pulled out tupperware containers with potatoes, boiled eggs and minute steak. Wow this was a first for me and Greg, but it really works for them. 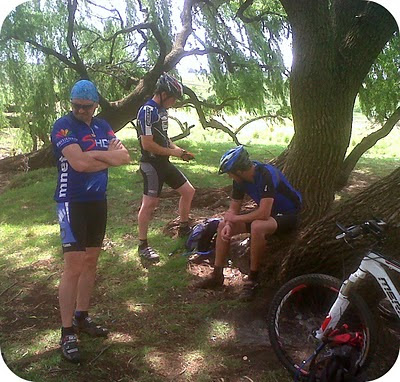 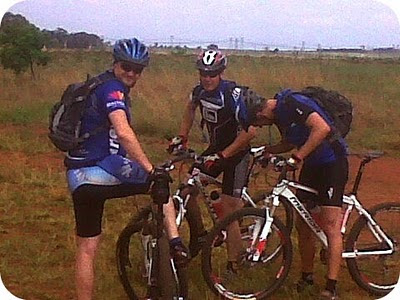 ﻿All in all it was a great ride, legs felt it at the end, almost 70km mainly off road, thanks to the boys for making it memorable.
Posted by Richard at 9:28 PM No comments:

Ride with the Master

Ok - the blogging has slowed down -  mainly because I have been out of action with the flu and this is a MTB Blog and I have been riding road bike the past few weeks (eeck).

After a nice ride with Greg before work this week I realised how much I miss the good old mountain bike. Work had us going to the Vaal river for a few days and this was a great opportunity to ride with the MTB Master (Melt)- the man who inspired me to start riding a good year ago. 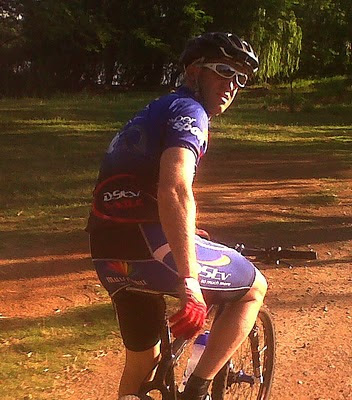 We got up at 05:30 and hit the road - not knowing where we were going but keen to find some tracks. We had an awesome little adventure finding paths and single track all over the place. Our exploring souls took us to places seldom marked by tyre but it was worth the adventure. We saw lots of mongooses on our ride and even had a buck dash in front of us.We eventually found a nice road next to the river that took us home (after jumping a fense or two).

It was really fantastice to ride with Melt and good to find new routes. 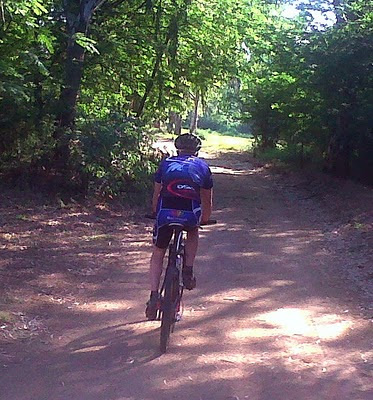 Posted by Richard at 6:14 PM No comments: