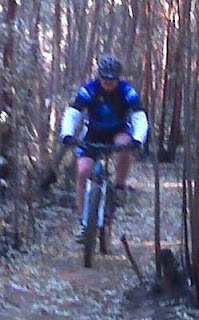 There's a Lion in the forest. 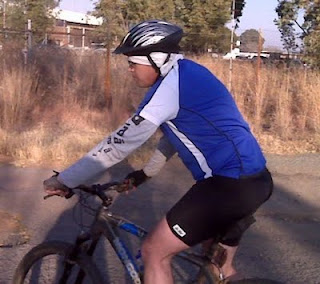 Ratty with his protective headgear - those ears are warm 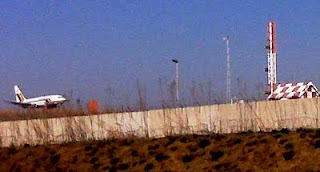 Ratty and Lion's weekend adventure ride took place at a MTB track next to the Airport. Really great technical piece in a small forest on the one side of the runway and a open stretch on the other side. Awesome to see the planes landing right next to you. Count down to the 60km race at Irene next weekend.....

Posted by Richard at 5:33 PM No comments:

The rat pushed his bike down the drive, the fresh air of the crisp spring morning invigorating his senses. Birds were singing and soon the sun would rise, making it easier to see the off road paths, more dirt less tar, this would please the lion too.
Ratty heard voices and picked up his pace, these were real voices not the abnormal ones in his head, he was accustomed to those but real female twittering voices.
Mmm early morning talent, right in his line of sight!
Oh the joys of Spring!
Ratty took a deep breath, flexed his buttocks and pulled in his paunch “ Good morning ladies! Lovely morning for a jog he said” he cheerily greeted them as he surveyed the cut of their tracksuits. (This is a family blog)

With such an energetic start he cycled off to meet the lion for one their weekly rides, the best time of the day he mused.
Ratty and Lion will have to drink beer to finish composing their own rock song about cycling to honour this feeling.
In the meanwhile…. Courtesy of Queen … … I want to ride my bicycle I want to ride my bike. ….. Fat bottomed girls they make the rocking world go round
Posted by Richard at 4:19 PM No comments: 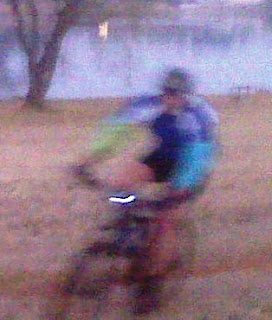 Ratty was so fast on our ride this morning that he could hardly be captured on camera...

Email ThisBlogThis!Share to TwitterShare to FacebookShare to Pinterest
Labels: Description of ride

Ratty woke up out of his normal dream and instinctively hit the snooze button hoping to return to dreamland, so far a normal start to his day.
So the story begins… the rat got out of out of bed and was transformed. Focussing his inner energy on the task ahead he dressed in battle gear and found the goose waiting. He busied himself with some minor mechanical adjustment to the goose until the rising adrenalin in his body woke his bowels.
Now… some 900grams lighter he was ready to go.The Lion by now would be cycling past the gymnasium. If ratty hurried he might catch the lion on the way up the hill.

After some primeval grunting the pair decided on a route and hastily ate up the tar looking for dirt. Ah the reward of the open fields the longing, the passion, the demands of the undulating paths beckoned…

The lion let out a “yip” a squeal of pleasure as he negotiated the drop off, scaring the honest passer by of the path, leaving ratty to apologise for the lions behaviour.
The rat did not mind, such was his joy of being free out of his cage, in the field “ Yip, Yip” The crunch of gravel under the goose felt good.

The pair rode on alongside sharing sordid banter but seamlessly moving to single file when the terrain demanded. Lion had seen a clump of trees on Google earth and seemed fixated about visiting them, his motivation unknown to ratty but he suspected the lion needed some distance in his legs to test his 60km commitment in Irene. No problem the rat felt good today.
But things changed as they dismounted to drag their bikes under the bridge. The lion choosing to lift his trek over the obstacle while rat chose the quicker race option, clearly the lion was inexperienced he thought smugly to himself.

Ratty did not even fear being shot as by an irate farmer so invincible did he feel
He had to admit though he was a little was relieved when a solidly disapproving steel gate forced them to urn again in a homeward direction. At the bridge the lions sudden stop for energy sachet made ratty a little more comfortable, the lion was capable of tiring after all… his own legs felt a little wobbly but he would not admit it now.

Back in the saddle the Rat’s fears had just begun to subside when he noted an ominous collection of vehicles ahead. Rat felt his sixth sense warn him of something, and his heartbeat rose feeding new blood to ready his legs Outwardly he cheerily rode on, inwardly prepared to meet the strange looking crowd. The sudden aggressive barking of killer dogs made ratty fart and he dropped a gear to accelerate away from the source of danger He knew the lion behind him would never be scared, but noted the lion accelerate non-the-less.

Ratty was not entirely sure, but did the fat lady in the khaki uniform sport the mountain bike hunters logo on the camoflauge cap? Was the old man with the crooked nose assembling a shotgun? Ratty farted again and crossed the tar road into new territory his mind strategising how to throw the sent and get the dogs of their trail

The lion crossed the tar, they had not yet heard the bugles signifying the start of the hunt,
Rat was not sure this bunch played by the rules, he could still feel the hot breath of the Alsatian as it attacked the walls of its cage when he passed them. No this lot were not to be trusted but the wily rat would do what he could to save his skin.

Fight or flight?…. Flight came to mind
The lion saw it first but did not realise the implication, Rat did, he followed the lion into the refuse site, this might distract the dogs for a while. The chicken manure would help, the nearby chicken farm too Then rat saw the race track, surely mixing their tracks with countless others would help throw the hunters if not the dogs One more tactic, get down to the stream and wash the scent now….all would be ok….. Ratty could hear motorized bikes in the field, witnesses!! at last the hunters foiled.

Survival in agricultural wastelands of Benoni sure aren’t easy But now life was simple, head home, negotiate the polluted wastelands, avoid punctures and feed on protein when you get home.
Irene 60km here we come.
Posted by Richard at 10:49 PM No comments:

Email ThisBlogThis!Share to TwitterShare to FacebookShare to Pinterest
Labels: Description of ride 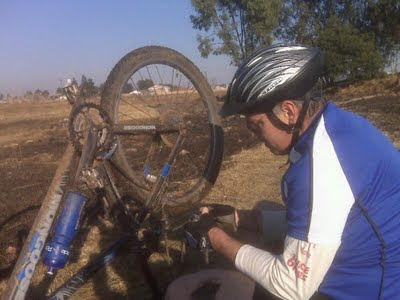 Ratty the engineer breaking his chain to make it shorter after his rear deraileur was broken whilst doing the airport MTB track
Posted by Richard at 10:43 PM No comments: 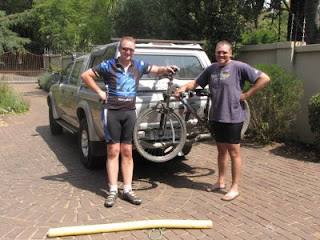 Lion on the left and his friend Ratty have just arrived home after a 50 km John Deere mountain biking race. Totally nacked but it was a good ride. Beat my time for the 40km race done earlier at Norther Farms - managed to win a bet with Malcolm the Machine as he didn't beat me by more then an hour this time :)
Posted by Richard at 10:39 PM No comments:

Email ThisBlogThis!Share to TwitterShare to FacebookShare to Pinterest
Labels: Races 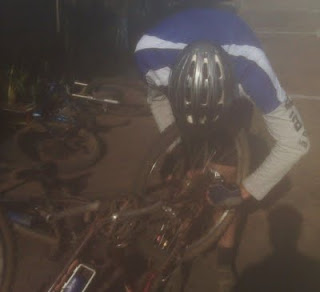 Part 1 - when it didn't happen

Stan the rat, spent a long time looking at the appalling weather outside. It is true that he contemplated turning his mobile phone off, surely thought, Richard the Lion will realise that this morning is not the best for an adventure ride. The rat drew a deep breath and the icy cold air filled his undersized lungs to half hearted capacity. The Mongoose well named for the metaphorical relationship it implied, stood nearby waiting to be used. Today it’s cold aluminium frame would see no action unless of course the lion phoned…..but the Lion did not.

This worried the rat a little, pleased as he was, his selfish survivalist personality was on occasion disrupted by his concern for the lions well being. He had put the absence of the lions call to the only weak point he knew the lion possessed. Richard had earned the name of the lion through fearless endeavour, through blood offerings in the swamp where he was once attacked by a swarm of vindictive and savagely territorial horse flies. The horse fly saga is of such epic proportion that it has earned nearly legendary status and really needs a more detailed chronicle, perhaps later.
Rat thought about the lion's early adrenaline raising interaction with the steamroller, redeeming features he thought but that too needs dealing with a little later.
Suffice the reader for now to know that the lion has also proved his mettle in resilient comeback after numerous falls. His tenacious handling of extreme physical and mental challenges was proven, ratty had to admit. Only a truly extraordinary circumstance would have keep the lion away.

Oh well, perhaps on Wednesday the rat thought, as he returned the Mongoose to its stable. The Goose would be even more demanding to ride if it did not get a mid week release.
Posted by Richard at 10:31 PM No comments:

Email ThisBlogThis!Share to TwitterShare to FacebookShare to Pinterest
Labels: Description of rides 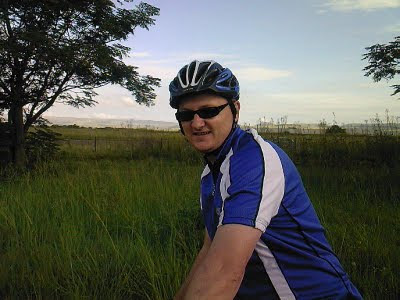 My first mountain bike race at Northern Farms in February 2009, 40km of mud and sweat, had to walk quite a bit, my time was awefully slow, they had packed up by the time I finished :) (Ratty was scared and I had to do this one without him). Thanks to Melt and Pierre for meeting me at the race and doing some of the course with me (won't mention the jibes on the amounts of girls ahead of me). Malcolm the machine really put me to shame by beating me by an hour and 20 minutes.

Posted by Richard at 3:55 PM No comments: