Berg and Bush Great Trek 2015 - wow what an amazing experience. My partner for this event was an old work friend Pierre and we also shared this experience with a fellow Benoni Rough Rider - Wayne. This was a spectacular 3 day event held in the Drakensburg mountains in Kwazulu Natal. I thought that this would be a scaled down version of Sani2C (given that the distances were shorter), but I was very wrong, this event was just as tough and the riding in my view was much better then the 3 x Sani2Cs that I had done previously. We did the Great Trek event which is one of three Berg and Bush events held one after another and is a bit more relaxed with a smaller field of people riding for enjoyment instead of podium places.

After our brief overnight stay and registering for the event at the Winterton Country club the day before, we made our way to the Border Post for the start of Day 1.
Day 1 was a hot 96km slog marred with mechanicals with temperatures reaching the mid 40 degrees celsius. We spent at least an extra 40 minutes in the heat then we should have, with the issues I had with my bike. First going down Solley's Folley my peddle hit a rock (pedal strike) and my shoe came shooting up leaving my cleat lodged in the pedal. I stopped a little later where Pierre was patiently waiting for me as it was hard to go down the steep single track when you foot kept slipping off the pedal. We tried to repair the shoe but the sole was broken where the cleat joined the shoe. We were left with only one option and that was to duct tape my shoe to the pedal so it wouldn't slip off. This made the rest of Solly's Folly (a steep single track decent down the mountain) very interesting and nerve wrecking, as I couldn't really stop and chicken out of riding some of the hectic technical stuff (given that my technical mountain biking skills are questionable).

When arriving at the next water point with my shoe still taped to my pedal I approached the bike mechanic (his name was Hilton) sponsored by Pyga bikes and asked him for help. I needed more duct tape as I had another 60kms to go to the end and I knew I would have to dismount at some stage if the hills/route got too hectic. Unfortunately he had none, so on the off chance I asked him if perhaps had a shoe for me, he rummaged in his bakkie and produced his downhill riding shoes. They were a size too small (9 instead of 10) and I squeezed my foot into his left shoe. Needless to say my big toe took a lot of punishment the rest of the ride and every pedal stroke was painful, but a least I could finish. Hilton you were a life saver, thank you. Please click on this link to see the Youtube highlights from Day1 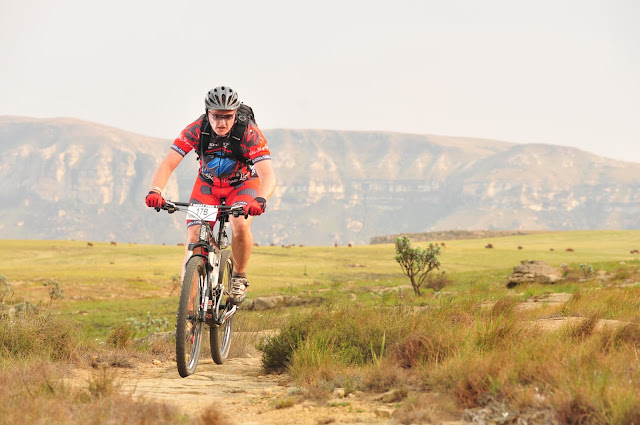 I also had problems with a slow flat on my rear tyre so we had top stop every few kms to pump or bomb the tyre. I was only at the last water point where there was a proper bike mechanic that we could put in a cup of sealant in the tyre and pump it hard again so it would last the rest of the day (and the rest of Day 2 for that matter). All in all, Day1 was extreme but fantastic riding, very hot and lots of adversity which we had to overcome and still finish with a smile on our faces.
Day 2 was shorter than the first day - 66km with a few nasty climbs (Mike's Pass) and incredible single track. Mazambaan, Puff Adder Pass and Big Red to name a few are incredible flowing single track trampled hard by years of cattle herds moving through. Wow, what an insane day, the weather was nice, route was awesome, my legs we not very co-operative in the middle of the race and I hit a bit of a wall. My partner however was absolutely incredible - Pierre is super strong and has been riding for years, he has done many ultra stage MTB races like ABSA Cape Epic, JHB2C, Tour of Wales to name but a few. He is a great friend and I really enjoyed doing this race with him. He pushed me a lot and made the riding much easier than it should have been and is responsible for most of these stunning photos. Please click on this link to see theYoutube highlights from Day2 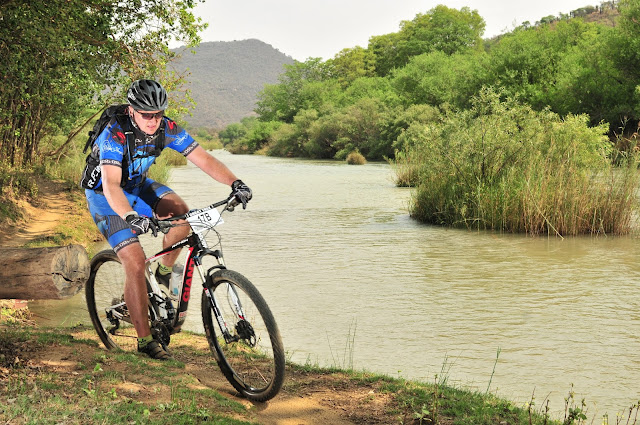 Day 3 was another exhilarating day filled with ups and downs. Once again my back tyre came back to haunt me a I had to stop every few kms to bomb it. Reaching a point of real frustration, the Pyga roving mechanics came to my rescue. There were 2 mechanics that rode the race and had back packs of tools etc... to assist riders that had problems along the route. They stopped and assisted me when I was trying to add more precious air to my leaky back tyre. The rim tape of my tubeless tyres had dislodged and air was escaping out the side by the rim. After adding another cup of Stans tyre sealant and pumping it up again, I was good to go for the rest of the race. These guys were amazing and what a great idea to have them ride the race and help people with mechanical problems.
Near the end of Day3 we had the climb up Spioenkop mountain - we were fortunate to have an historian tell us about the battle of Spioenkop the day before so it added a new light when getting to the top and thinking what had happened 115 years ago. This was the place where the battle between the Boers and the British happened in January 1900.  Details of the battle can be found on this link. The British suffered 243 fatalities during the battle and many were buried in the trenches where they fell. Approximately 1,250 British were either wounded or captured. It's interesting to hear that Mahatma Gandhi was a stretcher-bearer at the battle, in the Indian Ambulance Corps and that Winston Churchill and Louis Botha were also at the battle (a stray bullet hitting any one these 3 could have changed world history). The Boers suffered 335 casualties of which 68 were dead. The British retreated back over the Tugela but the Boers were too weak to follow up their success and Ladysmith would be later relieved by the British four weeks later.


The rest of the race was an exhilarating decent off Spioenkop down some insane single track. Unfortunately, I had quite a bad fall halfway down, going over the handle bars, winding myself and hitting my head on a rock on my connection to the earth (and yes the rock is ok). And who was the first person to come to my side and help me up? A Pyga mechanic of course.
So with my confidence completely shattered, I limped the rest of the way home finally catching up to my ever patient partner who was waiting for me after the Bell Run. 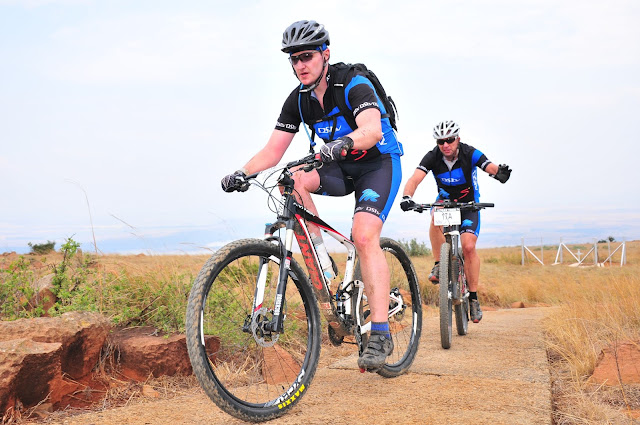 All I can say that this was an incredibly well organised event, there were not too many people that made the event unbearable (never having to queue for food, showers, toilet etc...). It is a race that I would definitely like to do once again to try and do better then this year now that I know what to expect. Thank you Farmer Gary Green and co for putting on a fantastic event!!!!


This is a Mountain Biking blog by Richard Dawkins located in the 'outback' of Benoni, South Africa.