Realising how flat the East Rand is..

I was fortunate enough to be able to do the Eqstra Spring Classic MTB race last weekend with Sean and Rebecca. Wow what a tough race and it made me realise once again that all the training that I do on the flatlands of the East Rand is not enough because you get a big reality check when you hit a proper mountain bike route. I thought I was pretty fit after averaging 24km/h in the Nigel AutoAlpina MTB race last month, but that was a flat non technical route next to the mielie fields. The Eqstra race was loads of single track and plenty of hills, my average was under 15km/h for the 44km route. An hour slower then the Nigel route for the same distance!!!! It really was a great race though, I thoroughly enjoyed it and it was special sharing the experience with Sean and Becky. 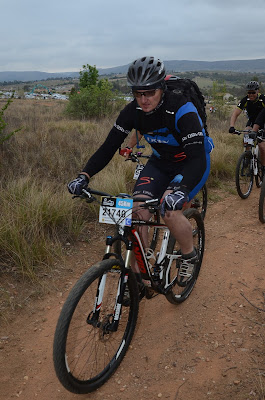 The 24th of September was a public holiday in South Africa - Heritage Day and what better way to celebrate then do a 100km MTB ride. The ride started out as being The Apricot Tree charity MTB outride but we had a lot of other riders join us also (we were 25 in all). We had a fantastic ride out to Heidelberg from Benoni and back, with a climb up to the Telkom radio mast. Awesome ride and a fantastic route with great people. It was great doing a new route, as this was different to our normal Heidelberg radio mast rides (different tower and way to get there). We were all pretty thirsty by the time we got back, as it was very hot and most of us had run out of water with there being no water/coffee stops on the way back. Unfortunately, this ride was a game changer for Sean as he had a mild heart attack on the ride and got his son to pick him up half way before going to the hospital in the afternoon. He had a stomach virus earlier in the week and on the long ride his heart took strain. Fortunately he was wise enough to call it quits when he was not feeling too well. He is ok now and just needs a month off the bike before reassessment by the cardiologist. Wishing you all the best Sean on your speedy recovery.
This morning we did a great ride out to the cell tower, brickyard, Serengeti and back via Monument hill before stopping for coffee at Mug & Bean on Atlas road. I was feeling strong and really enjoyed the ride. It makes such a difference if all your cylinders are firing. Nice group consisting of Becky, Greg, Paul, Alistair, Juan, Wayne and Mark. I finished on 80km and managed to sneak in to share Greg's KOM with Paul on the Atlas drop off single track segment.
Posted by Richard at 5:30 PM