There are 2 meanings to the heading of this post: Firstly I am running out of time before my Berg & Bush stage race next month (need to up the training intensity) and secondly I have been riding with a younger version of me (my son Caiden). It has been a very diffferent month of riding as I have managed to spark some interest in my 13 year old son to ride with me on the weekends. We would ride out to the Benoni plots and stop for a coffee and a muffin before returning home (28km round trip). Awesome bonding time to spend with my son (with having 4 children it is sometimes difficult to spend individual time with one sibling). He even did a couple of races - the first was a 15km race which he did with his friend - whilst I did the 44km race (I came 22nd out of 90 riders) and the second was a 20km race which we did together. The latter was an awesome experience, we did the Witpoort Primary School MTB race out in the miellie fields near Bapsfontein. Really awesome to share the great outdoor experience with my son. Also it was an interesting start as it had to be delayed by 10 minutes so a herd of cows could pass down the road (and we had to pass the herd twice in the race).

The idea was to then do a 35km race with my son but unfortunately we had our first summer rains and the route was extremely muddy so I did the race alone - Transvaal Galvanisers MTB race. It was a great race despite the conditions and it even had a floating bridge. I managed a respectable 23rd out of 85 entrants for the 50km race which was shortened to 37km because some of the route was unrideable. Few more weeks until my stage race experience in the Berg so time to bite the bullet and do some longer, harder and more technical rides. 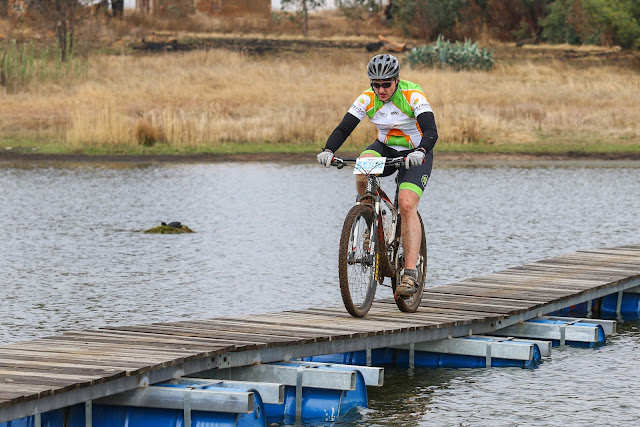