So it has been a really good week of riding with over 280km in the saddle. On Monday the 24th of September, I did my second road race of the year, the Fountains Cycle 105km race - and yes, I only got on my road bike for the first time the morning of the race. This race was close to home so I decided to ride the 9km to the start, Greg(1) fortunately rode with me to the start and kept me company until we were sent off. Phew it really was a gross morning - cold and windy.
The start of the race was awesome - I couldn't believe how fast I was going. My road bike is just so much faster than a mountain bike. For the first 40kms I was averaging 40km/h....and then we turned and I realised why I was going so fast (besides the drafting) there was a massive tail wind. We then got hit by a massive side wind and then a hectic head wind on the way home. My average speed plummeted and I struggled in the wind the 60 odd kms back to the finish. All in all I was pretty happy with my race, besides the wind messing me around and also that my butt, really hurt, you feel every bump in the road on a road bike. Here are my stats Fountains Cycle Race 24-09-12 . 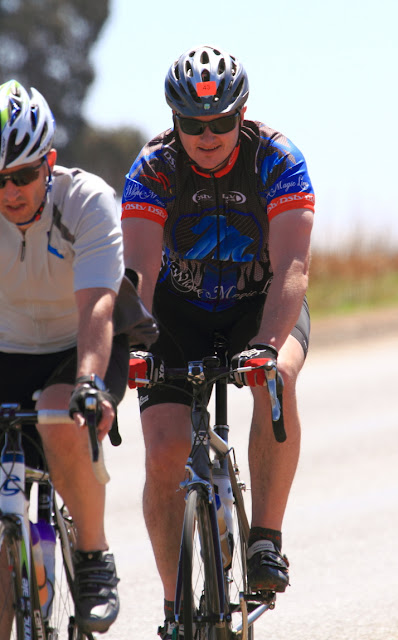 ﻿So I must mention that this was my longest ride ever, 9km to the start and then 105km race (ugh I was glad my wife was at the finish to pick me up though as I was pretty wind whackered).

The rest of the week involved 2 early morning rides, 45km in the plots with Marco and Jana and then another 45km with Greg(2) to Bedfordview (incl Fischers Hill). Today I was left without a ride - Greg(1) was sick and other mates were riding away from home or had Rugby hangovers. I decided to go on a short solo ride, starting after 7:00 and hoping to do about 30-40kms. Along the way I was fortunate to meet with another solo rider, Chris. He also did Sani2C this year and is quite a strong rider. We had an awesome ride and there were parts that I had never left a tyre print on before. We ended up doing over 73km at a healthy 23.5km/h average. It was great to ride with a new person and find new routes etc...I really enjoyed the ride and hopefully I can join his group when I am left without a ride again.
Posted by Richard at 6:47 PM No comments:

It has been a great few weeks, summer is on its way and our early morning rides on the mountain bike before work, are getting interesting. Normally on a Tuesday and Thursday morning I leave home at 04:30 and join Greg, Mac, Denzel and Brad for a fast ride to Bedfordview and back (all of us on mountain bikes). We normally do about 45kms and our average speed seems to increase every time we ride (last Tuesday we did 47km at an average speed of 25km/h). What is nice about these rides is that the terrain varies and there are a few long hills that we tend to race up. What is not nice, is that there is some traffic on the way home that we have to dodge.
Wednesdays and now Fridays I tend to go explore in the quieter plots, accompanied by Marco and this morning we were also joined by Jana, both of whom are training for the 105km Cratercruise MTB race next month. These are great rides as we mix it up, with a bit of tar and dirt road together with a splattering of single track.  All I can say that it is good to be out there riding and viewing the magnificent sunrises while most people are still sleeping.
Posted by Richard at 5:30 PM No comments:

Oh what joy the advent of summer brings: the weather is getting warmer and it starts getting lighter each an every day. Summer also brings lots of rain and plenty of mud. Today Greg, Marco, Adam and me went for a great ride into the outskirts of Benoni and Kempton Park. There was a minny monsoon the night before and our route was extremely muddy in parts. On the other side of Serengeti Golf Estate the river had burst its banks and we had to ride through flooded roads wetting our bikes and feet good and proper.
﻿ 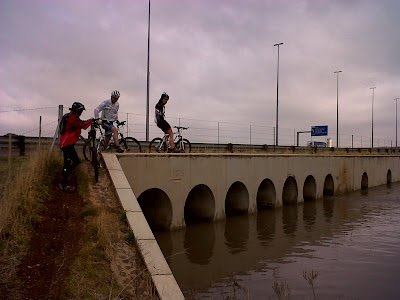 ﻿
I had another over the handle bars fling, when going through a puddle at the Sandpan on the way home: my front wheel sank right into the soft sandy mud, catapulting me right over the bars and landing unceremoniously in a muddy puddle (much to the delight of Adam and Marco behind me). ﻿

We ended up doing just over 60km and our creaking bikes needed a thorough wash after the ride as mud does not do the bike's components much good. Good ride with great company.

P.S. This ride will go down in the history books where Marco broke Adam. At the end of the ride Marco was setting the pace up front and Adam ended up cramping and limped home with his tail between his legs (which does not happen too often).
Posted by Richard at 5:44 PM No comments:

What a great way to spend the first day of spring. The Nissan Down & Dirty mountain 70km race was held at Cornwall College at Irene just outside Pretoria.  The weather was great, RIP to the leg and arm warmers and welcome back to the sun screen. This is a very popular event, with over 2500 mountain bikers hitting the tracks and making loads of dust.I really enjoy this race, as we do a lot of the route, that we do on our longer rides when training for Sani2C i.e. Benoni to Irene and back. We had to have a batch start, given the number of people, Greg and I started in batch D with Adam and Marco in batch C. It  was good to see our Olympians, Burry Stander and Philip Buys starting this race also (in batch A of course).
The race started pretty fast as we rode on the outskirts of Cornwall Housing Estate, we paused for a bit of congestion when getting onto the single track along side the highway, but nothing too serious except a welcome relief to catch our breath. I rode with Greg for the first 20 odd kms but then I latched onto some guy's wheel on the long dirt roads through the windy farm fields in a bid to up my average speed. It was great to meet new people on the ride - I rode with Paul from Kempton for awhile and I finally met a friend from twitter @DaleClark643 on the route. Just before the second water point I passed Adam, he was having problems with his seat post as his clamp broke just before the race - the duct tape was not providing the permanent fix he was looking for. At the 50km mark we were joined by the 40km race riders, which although caused a bit of conjestion, it was good to ride past them knowing that a few months/years ago I was the one being passed by the 'marathon riders'.
At 60km I had managed to up my average speed to 21km/h by pushing it on the long jeep and dirt tracks. But then my race pretty much came to an end, when going down a pretty hazardous steep downhill (with loads of rocks and loose rocks sand) I went over the handle bars when trying to avoid the girl that was braking in front of me. Wow, what a tumble, beside being winded, I had hurt my right hand quite badly.  The rest of the race was a pure nightmare. My hand was hurting like hell and I struggled to hold the handle bars, never mind changing gears, this resulted in me having another great tumble, hitting the ground so hard that I am sure it should have registered on the Richter Scale.
My average speed plummeted as I struggled to stay on the bike for the last 10km of the race. Almost there, with only 4km to go, but then there was this massive queue of riders. Very disapointing indeed, as this happened last year, I was hoping the new route would resolve the tail backs. The organisers should have anticpated that sqeezing a couple of thousand riders through single track with technical obstacles near the end of a race would end up only in delays and frustration. I realise that one of the reasons for the hold up was that the bridge that was made for the race was broken and you had to dismount and walk through the river. But even if it was fixed, the bank on the other side was so steep that most riders would not have been able to ride it. Bad planning @MTBseries.

All in all it was a great race besides the last bit, I thoroughly enjoyed myself, great to catch up with so many friends. My mates Craig and Mieke were cooking the boerie rolls and hamburgers at the finish which went down very well. My riding stats took a plummet after my fall and the 30 minute wait at the end, but here they are anyway Richard Garmin stats ﻿
Posted by Richard at 7:21 PM No comments: