The last two weeks have been horrific! The flu season is prevalent in (not so sunny) South Africa and this year, I have not been spared. The dreaded flu has managed to sneak into my house and make itself a most unwelcome guest. It has been a rough 2 weeks of fighting that dreaded invader, armed only with every natural remedy that exists (no we don't do antibiotics). I think anymore cups of honey lemon tea and I will be forced to go visit the doc for the big artillery to assist in my fight. The picture below captures the essence of my struggle.... 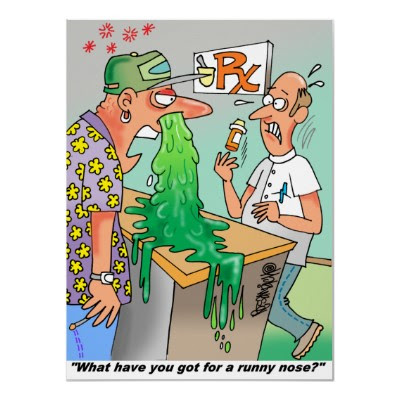 Well I am almost back, it has been frustrating sitting on the sidelines and not being able to ride. I had to forgo my entry in the Nissan Diamond Rush mountain bike race (that I was really looking forward too) as I was not too keen to leave parts of my lungs on the side of the track.
Yesterday was my first ride, Greg (yeah he is back on the bike) and Adam joined me. We did a new loop around Serengeti Golf Estate (my Garmin link here) and rode some new parts that we had not ventured on before. We did 60km in total and it felt really good to be out there even though it will take some time to get back to the level I was at a few weeks ago. Below is the Google map of the route from my home and back... 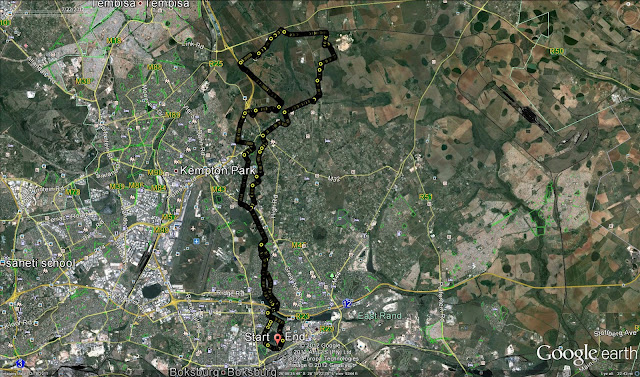 Posted by Richard at 8:31 PM No comments:

The big set up

After a few weeks of sore muscles and Greg's ITB injury scaring the S%$* out of me, I decided to have a proper bike fitting done. This is when your bike is set up according to your body measurements and movements (BG Fit), so that you can optimize power output and avoid unnecessary injuries. I was fortunate to see an advert on The Hub for David from XCOSA that offered professional qualified Body Geometry assessment and body-bike set-up. Greg was also keen because he is willing to try anything to get back on the bike again. So after a few emails David agreed to come to us and do a thorough assessment and set up.

Wow, this was actually a lot more intense than I expected and the first few hours were an assessment of our bodies as Body-bike integration requires a thorough understanding of Anticipatory Response Regulation by the brain.  Then the tests and measurements were then used to calculate the optimal set-up of our bikes. First, the cleats on the shoes - mine were to high (I was pedaling with my toes) and they needed to move more inwards so my feet could be parallel to my hips and shoulders. Very important the foot has a natural angulation for walking and running and therefore during riding the arch needs support. This can be solved with inserts that give your foot the proper support. Next the seat was adjusted after measurements were done once again. Lastly the cockpit, I was too low on the bike and my handlebars needed to be raised. The short term fixes have been applied and it felt a whole lot better on my 60km ride this morning. But I need to spend some money on a new wider saddle (my bum bones are right on the edge of my Fizzik Gobi saddle) and I also need a new stem (17degrees by 90mm) to give my handle bars a better, higher angle. I can't wait to get these and then David will come back for the final set up. It was a great experience, David was awesome and very knowledgeable (he spent over 5 hours here) - well worth the money it cost. 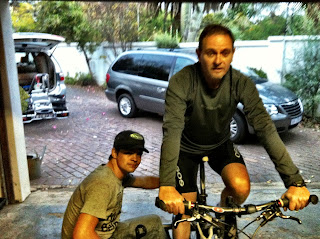 Posted by Richard at 9:02 PM No comments:

Yes it is that time of the year again where I am glued to the box for 3 weeks watching the exciting Tour De France. My money is on Wiggins this year - yes literally I got 6/1 on him a few months ago, so if he wins my R50 will grow to a nice R300. I must admit I am super impressed with young Peter Sagen, he is absolutely incredible and a name in the TDF for years to come. But hey what's with all these crashes? I thought that was a mountain bikers prerogative....but here is a picture that was tweeted by legendary TDF manager, Johan Bruneel that I think is fitting after the last few days.

Posted by Richard at 7:55 PM No comments:

Today I joined Adam and Marco for my first ride at the relatively new Modderfontein Mountain Bike Trail park and wow it defintely did not dissapoint. We parked at the sports clubhouse and paid R40 for our entry ticket and then rode our bikes the 2km to where the trails begin.

It really was a great ride plenty of flowing jeep track, single track and forest sections. It is hard to believe we have so much open ground right here in the middle of Johannesburg. We did just over 42km and did part of the green route first and then the yellow route (click here to check out the route). The routes are well marked and maintained and I enjoyed every minute of my riding there. There are a few small drags and hills so the total ascent we did was just over 500m, which got the heart rate up nicely (ave 155bpm). At the end of the ride, back at the sports clubhouse, there were loverly egg and bacon rolls and a Seattle Coffee van that made an awesome cappucino. Great ride definitly will be back....
﻿
﻿﻿
﻿
﻿﻿
Posted by Richard at 6:29 PM No comments: