Only crazy dedicated mountain bikers would get ready for a race when it is minus one outside...brrrr. Up early to be collected by Greg by 05:45, wearing a few more layers of clothes then normal. Greg arrived looking a nice green colour, as he had already vomited up the previous nights dinner. Fortunately Pretoria was one or two degrees warmer than Benoni, but it was still freezing whilst we set up our bikes and headed out to the start of the race.﻿﻿

Greg was in group E (after giving up his A status in the 40km race) and Clint and myself were in group G - which started at 08:00. And off we went - I managed to keep up with Clint for the first 5km on his 'training ride' and then my heart rate monitor was beeping like crazy, so I slowed it down. At 10km there was Greg on the side of the road, now a darker shade of green as he had just done another huge projectile deposit next to the single track. We had a quick chat and he told me he was heading back as he couldn't keep anything down - eish how unlucky.
A few km's later came my nemesis the dreaded bridge that I had been dreaming about. The 9m wooden bridge was crossing a river and there was a drop off and climb on the other side - I hesitated whilst going down and braked which sent me over the handle bars and landing square on the bridge (ok I am getting better as I fell into to the water off 2 bridges last year :-). My tool canister plopped in the water and bobbed down the river, I waved goodbye to my tubeless repair kit, bombs and multitool etc as there was no way I was going into the freezing water.
The rest of the race was hard - the cold wind was terrible and with the fall my confidence had taken a major knock, so I walked a lot of the technical stuff. I was also more carefull than normal as I did not want any punctures with my repair kit on its way to the sea. I switched on my headcam after 56km and got about half an hour of footage - below is a few minutes of what was recorded. There was some fantastic single track on the race that left me in awe well into the night.
This race wasn't my race, I was cold and my energy levels were just not there - so many people went past me like I was standing still. Eventually after 4 and 1/2 hours I trundled over the finish line - poor Greg was there to greet me after waiting for the past 3 odd hours, not feeling good at all (thanks you are a good mate). At least I managed to get some bling to take home, so I can remember this race and the challenge it threw my way. Well on the positive at least I got my value for money and was on the route longer than others.  ﻿
﻿P.S. I think I owe Jacques a bike wash
Posted by Richard at 5:39 PM No comments:

What better way then to spend father's day riding than on my mountain bike. I was woken up at 05:00 with the dog chunking next my bed just to remind me that being a father does not stop with my 4 kids. Got up and made a fire to take off the chill while I waited until it was time to hit the road.
After receiving a message from Clint that the flu had chained him to his bed, I met Greg at the gym and then Jaques, Hennie and Karen at the BP. The weather was slightly nippy but warmed up as we rode, we did a pleasant ride, a little slower and shorter than expected but it was awesome to be out in the great outdoors. We split up from Jaques and Karen at one stage, but got called back as Karen had a flat and did not have a spare tube. Below are the knights in shining armour quickly putting the new tube in her wheel.
Nice ride and back home in time for a breakfast with the kids and braai for lunch. Did 50km exactly at just under 20km/h, ave heart rate a low 130. Think I am ready ﻿for the Nissan Hazeldean race next weekend - can't wait.
Posted by Richard at 5:13 PM No comments:

Friday the 17th of June was a good day to be off work and riding my bike in one of the best bike parks in South Africa - Groenkloof/Fountains. I was fortunate enough to have been bought a couple of lessons with Dylan Victor by my 2 friends Melt and Pierre (guess they were worried about me after 3 trips to the emergency rooms in the last year).
Melt was Dylan's partner for 2 ABSA Cape Epics and knew how knowledgeable he was with mountain bike skills (he trains a lot of the professional riders). This was my second lesson and it was incredible how much I learnt, you realise that it is all about positioning, momentum and weight distribution on the bike. Dylan is a brilliant teacher and really installs confidence in you and knows exactly how to improve your riding skills. Greg came with me and also partook in parts of the lesson, so I am sure he will be reminding me of what I learnt over the next few weeks/months/years of riding.
Below are a few photos taken by Dylan during the lesson, as you can see I have learnt to lean into corners, straightening and putting pressure on the outside leg and also crouching forward allowing flexibility with the arms etc.

﻿
﻿This was an incredible experience and I would recommend to every mountian biker to go on a skills course to get the fundamentals of riding. No, this will not stop you from falling (I had at least 4 big falls during the lesson) but it will limit the number and the type of falls you have. A big thank you to my friends Melt and Pierre who made this possible for me.
Posted by Richard at 3:59 PM No comments:

At last the cold spell is over and we can come out of hibernation and put some time in the saddle and not freeze our nuts off. Greg and me met up with Clint at the BP at 07:30 and it was a beautiful day for riding. We headed out past Dunblane Estate and then past Barnstormers model flying club.
Unfortunate stop for my #@$%^&* rear tyre that flated again - couple of bombs and a plug soon sorted it out. I also lost a screw for my cleat and envisaged an awkward ride home - Greg managed to find something that could fit in and secure the cleat and we were back in business. All three of us had a fall each - I think Greg won the trophy for the best one, as he ended up in a puddle and got a bit wet. I managed to get some of the ride in a video below. 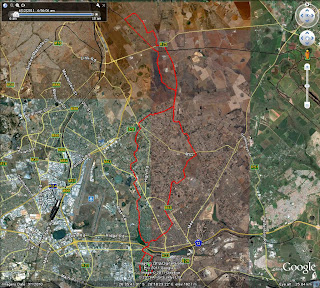 Another awesome ride 63km total distance, ave speed 20km/h, ave heart rate 154bpm, 355m ascent.
Greg rode like he had a plane to catch (which he did - Nigeria for a few days), guess I will have to brave the cold and dark alone for the morning rides...
Posted by Richard at 6:04 PM No comments:

Brrrr cold start to an early Saturday morning ride, I left home at 06:20 to meet Greg at the gym at 06:35. My Garmin was showing me it was 2 degrees Celsius, my new gloves and inners were doing their job, but my face was freezing (being the only exposed area). I picked up Greg and headed off to the BP to meet Clint and the gang. Greg sent me loads of SMSs and a missed call trying to try bail out of the ride (his week in Kenya left him with a Delhi belly), fortunately these were ignored and he joined us anyway.
Was a nice group ride, 7 of us in total and from home and back it was just under 50km. Below is a short video of parts of the ride.

Posted by Richard at 8:46 PM No comments: