Yup time flies when you are riding your bike - ok so we did over 300 hours last year on our trusty steads and 2012 is definitely going to be a whole lot more.
New Years Day ride - Greg and me had organised a ride to Heidelberg with Ian (Procycles), unfortunately the weather caused us to cancel the ride early in the morning and Greg and me settled for a 60km ride on the tar later because of all the rain the night before. As you can see below even the roads took a hammering. 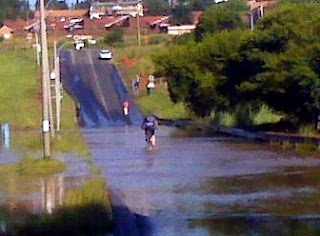 2nd Jan - I did a solo ride on the tar and went to Bedfordview to tackle Fischer's Hill, was an awesome ride on the MTB with 350m ascent in just over 40km.
Clarens - we were fortunate to have a family holiday in Clarens in the Southern Free State province for a few days. I managed a few rides and the scenery was spectacular. The hills were pretty hectic and really got the heart pumping. On one ride I got chased by three dogs when I rode past a rural village - quick interval session with lots of shouting and I managed to escape their evil fangs (once bitten twice shy). ﻿
﻿﻿﻿
﻿﻿﻿
﻿ ﻿ 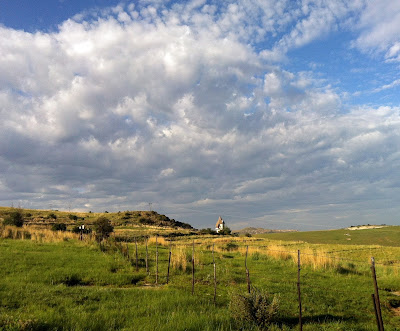 ﻿ ﻿
Thaba Trails - to finish off the first week in January Greg and me went to Thaba Trails in the South of Johannesburg for the first time. Wow is all I can say, it was really hectic - we did the green route and really struggled as there were a lot of rocky climbs and descents. Really good training as our heart rates were being pushed to new limits every hilly climb but unfortunately I also walked a lot as I did not trust myself on some of the technical stuff (both up and down hill).
Posted by Richard at 3:26 PM