Just another random collection of events.....

So winter is in full swing here in South Africa and my riding companions have slunk off into the warmth of their beds (besides a few dependables'). To be fare it has been a very mild winter with the temps very seldom getting below 2 or 3 degrees. The dark is what really gets to me in winter, not so much the cold, leaving home in the dark for a mid week rides and getting home before the sun rises. We still manage to do a least 3 mid week rides - leaving home at 4:30 to meet who ever is up for the ride that day. The only common factor in these rides is the compulsory stop for coffee.

On the weekends we normally have a long ride on Sunday, I have had some great rides the past few weekends, but these have been laced with a few technical issues that have made it interesting. We did a ride out to Big Red Barn (BRB), which was our coldest ride this year with temps reaching -4 in some parts. After a breakfast at BRB, just after we left, the bolts on my big chain ring snapped and left the chain ring spinning around the crank. We zipped tied (thx Mike) the chain ring to the crank and I had to ride/spin 50km home in my small chain ring. Fortunately the best bike mechanic in the East Rand was at home so I could drop the bike off at Sean's house and have a coffee with him an Becky until my wife could pick me up. Sean's service is really awesome anyone who does not use him in the East Rand does not know what they are missing. Brown Cabs
The next weekend was a ride out to Sentrarand Michael had to come to my rescue again with his tools as my gear cable slipped and I had no gears. Marius and Mike had to do some make shift adjustments in order that I could peddle on in relative comfort.
Today was a great outing in the South of Boksburg with Greg, Claire, Catherine and Inati. It was really refreshing to do new routes, Greg was the route director and took us on some really cool routes. We even climbed up the big mine dump that I always wanted to try and ride up. This was very interesting as it took us awhile to find the way down, after a few attempts we finally found the path less traveled that took us to the bottom.
Lastly on our Friday coffee ride - Darren managed to snap his frame. Fortunately it was just around the corner from Craig's shop so he could walk there and phone his wife for a lift home. Good news is that Pyga will replace the triangle at no cost to him. As a Rough Rider he should try and be more gentle with his bike :-) 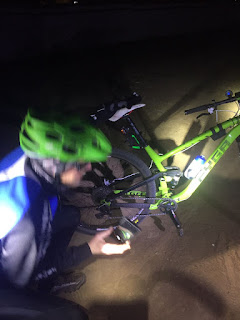 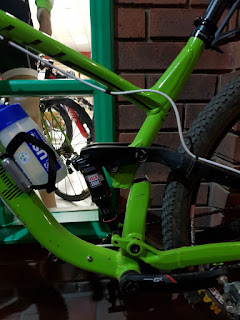 
This is a Mountain Biking blog by Richard Dawkins located in the 'outback' of Benoni, South Africa.