Today summer is definitely back with a bang, my Garmin recorded temperatures of over 36 degrees Celsius - arm and leg warmers RIP (until I need you gain next year). I had a hard but fantastic ride at Modderfontein Trails bike park. I was fortunate enough to ride with Marco's brother Ricardo, I met him at his house just before six and we then rode to the bike park.  Ric is a strong rider and I spent most of the day just trying to keep up with him. We rode the red route at Modders and I was pleasantly surprised with all the new tracks they have made - this place just gets better and better.
﻿After a full lap we went back to the start / finish and were joined for a second lap by Ric's wife Lauren. I must admit I was pretty poked by now, so the slightly slower pace on the second (shorter) lap was most welcome. Lauren had a fall and I took it about myself to outdo her a few minutes later. Coming down a drop off my tyre washed away in the sand and I gave the earth a big klap (damage - one really bruised thigh, cuts on the arm and pride hurt slightly).
﻿﻿ 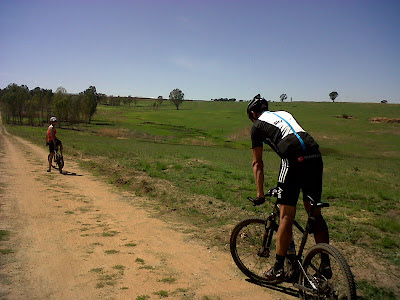 ﻿﻿
﻿'Modder Garmin stats 07-10-12' it ended up being a great (yet painful ride). Ric and his wife are fantastic, it was great to ride with new people and I experienced new adventures. Fortunately I was 'forced' to get a lift back to Ric house but Ric showing true grit rode home, finishing up on 83km and I am sure over 1000m ascent. Adam and Marco watch out he has got your number...
Posted by Richard at 3:17 PM