Ratty and Lion got off to a cold windy start, the Rat had tried his best to weasel out of the ride, but sanity pervailed (a real man does not say no to the fresh open plains that beckon). Off to the sandpan at a brisk pace 25km/h (ok that is brisk for us).
At the Sandpan (old mine with lots of ramps and small hills that motorcross maniacs have converted to a small track) Lion almost came a croper had Ratty not warned him that there was a massive hole after the ramp he was about to ride over - phew.
Off to the pan which had dried up somewhat, crossing over the dried mud that was once covered in water a few months ago. Below are photos of the two of us and the seagulls that we disturbed. 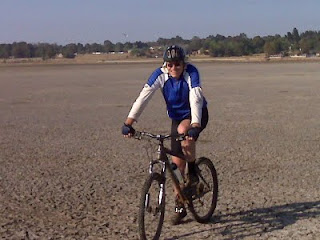 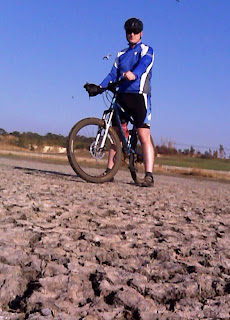 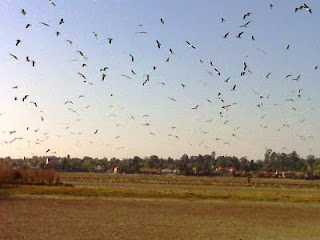 The next few kms were hard and relatively fast, Ratty reminiced that we first walked to one small hile next to the polar field - the legs are getting stronger.

A few kms from the end - yes you guesed it Ratty had another puncture. Two at the same time to be factual (but the front one sealed itself) so only the back one which had a new tube in from a puncture during the week was damaged. THE SCORE IS 11 NIL TO LION. 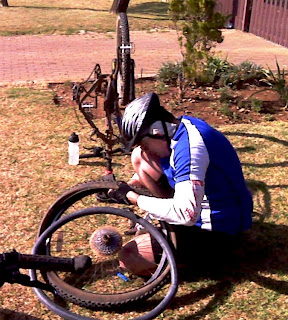