Andrew is at last a real mountain biker!! He joined Greg and myself for a nice Xmas eve morning ride, we did 50km's mostly off road. It was a really awesome ride and Andrew was a natural, he manged to keep up with us and made us really scared on how strong he will be when he gets his new bike.
He has now officially joined the  MTB riders club by having his first fall. He was going over a mound of building stones and hit a rock on the other side that sent him over the handle bars. It was a classic fall and as with most falls comes when it is least expected. He shot up, dusted himself off and gingerly remounted his bike. Here he is a few metres later full of smiles - welcome to the club Andrew. 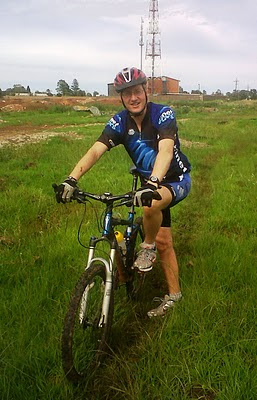