Bite of a dog

Sunday the 20th of February 2011 and my first visit to the doctors emergency rooms for the year. For once it was not a result of falling off my mountain bike. We were riding  next to Serengeti Golf Estate on jeep track, when I saw an unusual  sight - ﻿slay dogs pulling carts on wheels. I stopped and chatted to the first cart (she had 8 dogs pulling her cart) and she gave me the run down of the sport (and told me she was getting used to her new disc brakes etc.). Unfortunately when I passed the second cart the lead dog decided to sink his teeth into my calve (twice). It all happened in slow motion and I couldn't actually comprehend that the dog wanted to tear my leg off my body. 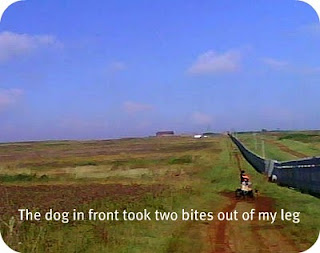 I eventually caught Greg and Andrew (they are not as social as me and don't stop to talk to strangers) and they were pretty shocked. Ok, to tell a long story short - we had another 20km to go to home before I headed to the emergency room (on my wife's insistence) and they cleaned and dressed the wounds - they apparently don't stitch dog bites (pic below).
﻿﻿﻿
﻿﻿﻿

I also had my headcam on and made a short video of the ride (including the bite) - excuse the swearing it was pretty painful﻿...
Posted by Richard at 6:32 PM